To answer the question "What is personality", three topics should be addressed:

How is personality defined?

When you look up the meaning of the word personality in layman's terms, you may find something like ‘that what characterizes a person’. In everyday life we use terms such as character, identity or predisposition.

Find out more about you and your strengths.

Scientists use more extensive definitions of personality. One of these definitions, by the American psychologists Randy Larsen and David Buss1, goes something like: “personality is a stable, organized collection of psychological traits and mechanisms in the human being that influences his or her interactions with and modifications to the psychological, social and physical environment surrounding them." Key words in this definition of personality are:

Your personality does not change just from one day to another, actually it changes hardly at all. If there are any changes these are very limited and slow. If they occur they may be caused by trauma or life changing experiences.

Personality is made up of properties and mechanisms

Personality is ever present

What are key determinants of personality development and differences?

A frequently asked question is: "Is personality innate or acquired?" This question is also called the nature-nurture debate. This issue has been debated by philosophers and other scientists for centuries.

According to John Locke (1632-1704) and his followers, the development of personality was purely a question of 'nurture' or education. The newborn child would be like a clean slate ("tabula rasa"), which can be shaped as educators want it to be.

Pendants of this vision, such as Jean-Jacques Rousseau (1712-1778), oppositely claimed that heredity has the most important influence on personality. According to Rousseau, the development of a child follows an inner, biological time table. As parents you do not play a role in this, according to Rousseau. This is probably also the reason why Rousseau sent his own children to an orphanage.

Through this kind of research it is now generally known to what extent heredity and environment influence personality. For example, we now know that characteristics such as extraversion, conscientiousness, neuroticism, agreeableness and openness are innate for about 20 to 45%. For the rest these characteristics are formed by influences from the environment, such as parents, school, friends, and etcetera.

Besides influences from the immediate environment such as education and school, the culture in which you grow up also influences the development of your personality. The distinction between individualistic and collectivistic culture is particularly important. In individualistic cultures, such as the US and European countries, the emphasis is on the development of the individual. In collectivist cultures, such as Indonesia and Panama, much value is attached to the group interest.

Individualist cultures stimulate the development of qualities such as self-confidence, independence and assertiveness; in collectivist cultures this is particularly true of qualities such as friendliness, modesty and loyalty. This may lead Europeans, for example, to believe that Japanese react shyly and submissive. Japanese, on the other hand, may find Europeans bold and selfish.

Research2 among bilingual people shows that cultural influences partly pass through language. The personality of bilingual people also depends on the language they speak. This study looked at Mexicans and Americans who speak both Spanish and English fluently. In general, Mexicans are less extroverted, a little less agreeable and less conscientious than Americans. Remarkably, if a bilingual Mexican or American speaks English, they reacted more extroverted, agreeable and conscientious than when they speak Spanish. It appears that by speaking another language, you also become someone else. You adapt your personality to be more in line with the culture that belongs to the language you speak.

How are different personalities described? 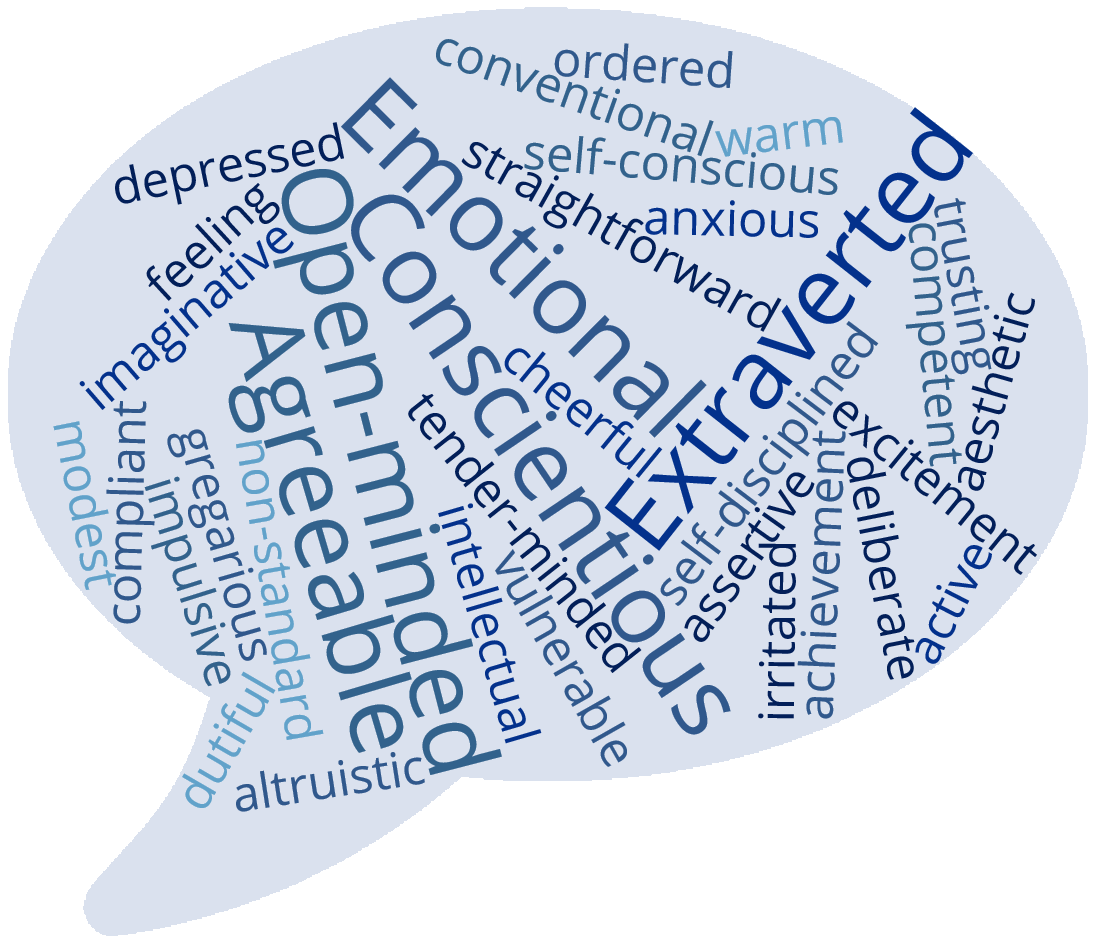 The lexical hypothesis states that all personality traits have rooted in a given language. Over the course of time, people come up with words to describe personality traits and to talk about them. The lexical hypothesis therefore states that the more important a characteristic is considered, the more words (synonyms) will exist for it. By studying a language you can find out which traits matter most in a certain language area, often a country. Moreover, you can compare languages with each other. You can then find out which traits are considered important in all language regions (or countries), and which traits are seen as important in one language area but not so much in another.

Researchers who take the lexical hypothesis as a starting point, are faced with a huge task. By means of dictionaries they have to try to group all words in a language that describe characteristics of people into clusters. They then do this for multiple different languages. Recent lexical research3, in which twelve languages were studied, shows that at least three clusters of personality traits arise. These are the clusters of extraversion, conscientiousness and agreeableness.

In the description of the Big Five personality theory below you can read more about what these clusters exactly mean and what characteristics they include.

Some things on personality disorders and illnesses

There are several factors that may cause personality disorders, or signal the presence or onset.

3 De Raad, B. et al. (2010). Only three factors of personality description are fully replicable across languages: A comparison of 14 trait taxonomies. Journal of Personality and Social Psychology, 98(1), 160-173.

Edwin van Thiel holds a PhD degree in artificial intelligence with a focus on cognitive psychological research. Turning proven scientific psychological theories and large data sets into full-fledged fully automated online tests for individuals to enjoy, is what gets him out of bed each and every morning.

In over fifteen years Edwin had co-authored over 140 tests and has lead 123test’s international expansion. His current interest is in using machine learning, Bayesian Networks especially, to leverage traditional psychometrics and automated report generation to a new level, moving from static expert knowledge systems to dynamic empirical data-driven advice generation.

“We need to provide individuals with tailor-made career advice based on daily measured labor fit of employees with the labor market, our global setup gets us the required data for that, both in quantitative and qualitative requirements. Exciting times ahead!”