Take a fast demo IQ test of the Pro Certified Admissions IQ test of the International High IQ Society, or our Classical Intelligence test to get a taste of what a full length IQ test is like.

(Are you here to prepare for an assessment? Check out our Prep Packages.)

When you complete a free IQ test you will get an estimate of your IQ score or the number of questions you answered correctly. Share your IQ score with your friends. Learn if you might qualify for membership of the High IQ society. 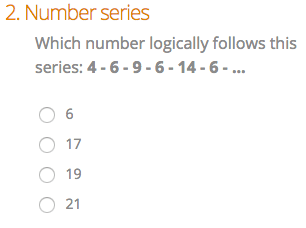 What is an IQ test?

IQ is an abbreviation of Intelligence Quotient. So, OK, but what is IQ? The IQ is a measurement of your intelligence and is expressed in a number. It’s an estimate also, there will always be a given amount of measurement error.

A person’s IQ can be calculated by having the person take an intelligence test. The average IQ is 100 by definition. If you achieve a score higher than 100, you did better than the average person, and a lower score means you (somewhat) performed less.

What is a good IQ score?

About 2% of the population has an IQ score lower than 69. Such a low IQ score often is hard to measure using a regular intelligence test. Very high IQ scores, say over 150, are also hard to determine accurately. This is because you need a lot of reference measurements to determine a specific score reliably. As very high and very low IQ scores simply do not occur often, it is hard to form such a reference group.

Can I practice IQ tests?

You can practice IQ tests, it will not make you more intelligent but it will increase your IQ score on a job test for example. Be sure to try any IQ test we offer for free in our IQ tests section. Especially for assessment preparation this will be very useful!

What IQ test types are there?

In a classic IQ test you will generally find questions related to numerical reasoning, logical reasoning, verbal intelligence and spatial intelligence. An IQ test that primarily measures abstract reasoning, either inductive or deductive, will often be a non-verbal IQ test. The latter is then called culture-fair because of that.

Both classic and non-verbal IQ tests make for valid and reliable IQ score measurements, although their definitions of intelligence do vary. Generally an IQ test consisting of more questions will have a higher reliability than shorter tests.