Raven’s matrices is a nonverbal ability test used to assess abstract reasoning. The test is progressive in the sense that questions get harder as the test progresses. The task is to determine the missing element in a pattern which is generally presented in the form of a matrix, hence the name Raven’s matrices.

The tests were originally developed by John C. Raven in 19361 and are currently licensed by Pearson PLC. Here is an example of the format used. 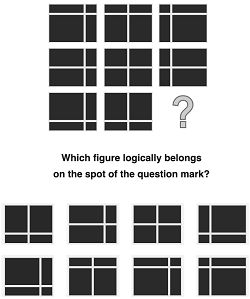 A question in the style of the Raven's Progressive Matrices test. There are eight patterns in this 3 X 3 matrix, the missing one must be determined from eight multiple answer options. There is a 'rule' how patterns change from left to right and top to bottum in this example. Do you see the right answer?

Given that the test is non-verbal it is considered a format that reduces cultural bias too. You can take a free eight questions Raven’s matrices like test if you want. It is a very popular test to estimate fluid intelligence in groups.

There are three forms intended for respondents of different abilities. The tests can be administered from the age of five all the way up to elderly. These three tests are:

This is the original test published in 1938. All questions were black patterns on a white background. There were 60 questions arranged over five sets, within each set the items were presented in increasing (progressive) difficulty.

These matrices were designed for people with general lower ability because of age (old, young) of mentally impaired. It contains the two first sets from the Standard Matrices with an additional set of 12 items inserted in between the two. Questions however were primarily presented on a colored background to make them visually stimulating.

The advanced form of the matrices more items (48), presented as one set of 12 (set I), and another of 36 (set II). Items are presented in black on a white background similar to the standard version, and also becomes increasingly difficult throughout the test. These items are suitable for adults and adolescents of above-average intelligence. You can take a free logical reasoning test to get a taste of what such a test is about. If you need to prepare for an assessment you can use our extensive logical reasoning practice package

In 1998, "parallel" forms of both the standard and colored progressive matrices were constructed and published. This had become necessary as the Raven's Matrices got too well known, i.e., the correct answers could easily be found before taking the test. Additionally, a revised version was also published of the standard test called the SPM - the Standard Progressive Matrices Plus – with more difficult items replacing some of the parallel ones. Because of these psychometric characteristics this version is able to differentiate better among respondents.